How To Do A Comic On BlogSpot

May 31, 2020
I have an old comic from a few years that I would like to get back to doing. The old comic is called Lil November and it is on one of the older BlogSpot themes, a theme that is not mobile optimized. Most of the comic isn't very good.

This is the "above the fold" view of the first page I want to keep as seen on Lil November: 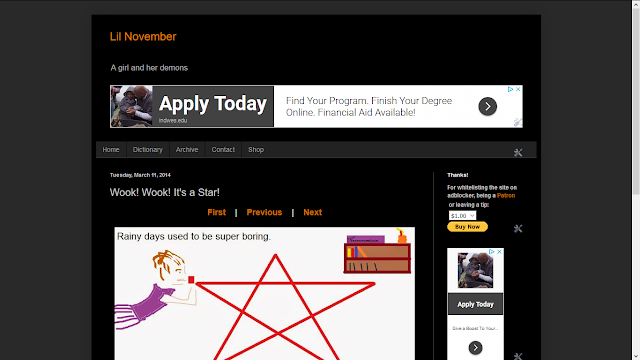 Compared to the new site, it is cluttered and the comic is cut off when you first go to the page. You have to scroll down a bit to see the whole comic.

This is the same page as seen on the new comic: 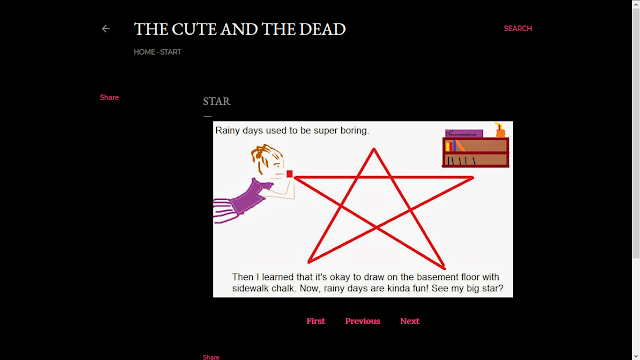 Goals: I want to rename it, keep the only story arc I like and move it to a mobile optimized theme.

A few months back, I chose a new name for the comic: The Cute and The Dead. It grew out of me and my sons cracking jokes about something.

Initially, I was stymied. I thought it wouldn't be possible to do a comic on one of the mobile optimized themes. But I stuck with it and eventually found the following combination worked:

Soho theme. I went with the one that shows lipstick and other cosmetics for its default background picture, removed that picture, then changed the background to black so I have an all black site. I then had to change some of the text colors to white or pink because some text was originally black, thus it was completely disappearing on the black background.

Settings: I changed it from 11 posts showing at a time to 1 post showing. I told it to "hide" Comments. I also did some of my usual default things, like I told it to stop asking me to post to Google+ and I turned on HTTPS redirect

Layout: I removed a lot of the widgets, such as About Me, Featured Post and Popular Posts. I also hid the date of publication on Posts and Pages.

I left the Gadget Title color black to blend in with the background so it disappears. Otherwise, the landing page says "Latest Posts" above the comic. (It was worse when I was playing with using the Featured Posts widget. It had Featured Posts above the image and Latest Posts below it.) This is unnecessary clutter that is mostly eliminated by keeping that text black (except for blind people using a screen reader, but I assume they aren't spending a lot of time on comics anyway).

I don't currently have ads on the new comic site simply because you can't have ads on brand new BlogSpot sites. You have to meet some criteria for establishing a certain amount of content to put Adsense ads on a BlogSpot site. I don't know if I will bother to put ads up at some point. These days, most of my sites don't have them. Ad blockers are really popular, so ads do pretty poorly. It might make more sense to do product sales, tips and Patreon only.

(Originally published elsewhere by me.)