February 12, 2021
I have a site called Project: SRO that I relaunched just yesterday. I think I started it sometime in 2017 and I didn't like the design and I wasn't clear what I was doing with it.

I think it was initially some kind of black and beige design. I hoped to eventually update it. I was just trying to throw up something that was some minimal level of functional while I tried to flesh out the concept in my own mind and I knew that would take some time.

Last summer, I pivoted the site to what I expected to be a temporary usage: A space to rant about local small town politics while losing my marbles during lockdown in a global pandemic.

At that time, I updated the look to something sort of city-themed that I thought was pretty, but it wasn't really a good design from the perspective of really supporting a particular concept. It was a light and bright blue and white theme with a background that was an outline of part of Paris inclusive of the Eiffel Tower.

I liked it but Paris really had nothing to do with the project. It was a cityscape and that was cool and close enough for my purposes because I expected this to be a short-term thing with me howling into the void about all my personal frustrations as mostly a form of therapy.

(Long, long, long shot: Maybe a few locals would read it and it would somehow do some good for this town. More likely: I probably burned some bridges and people I was mad at will never speak to me again and nothing I wrote about will make a bit of difference here.)

After a few months, I had my fill of that and made the site private and moved on to more serious stuff related to my interest in community development work, namely launching Eclogiselle which has a surprising amount of traffic (weirdly: most of it is from Romania ¯\_(ツ)_/¯). So I feel like howling into the void was certainly good for me and a constructive use of my time, though perhaps it does nothing for the town I live in.

You can make a BlogSpot site Private by going into Settings and under Reader access you check "Private to authors" instead of "Public." 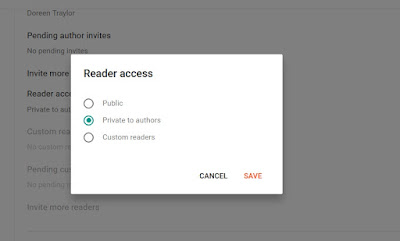 Maybe three days back I picked up my phone and found myself inadvertently on some screen telling me I had just deleted my lockscreen background and to pick a new background. No big loss. It had been some default image that I didn't even like.

But if I had to pick a new image, I was going to pick one I liked. I ended up with an image from New York City and the memorial in light for the Twin Towers.

Because the memorial lights are some shade of blue, it changed the lettering on my phone's date and time to a shade of blue as well, though a different shade of blue than is in the background image. Here's a screenshot: 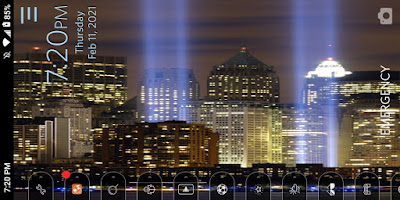 The pale blue color from the date and time lettering paired with the warm dark brown of the night sky had me really excited. A warm dark brown -- that I think of as coffee or cocoa colored -- paired with a sophisticated shade of light blue plus some white accents is a color scheme from a particular design style that I like.

I have had that particular color scheme on my radar for a while now and have occasionally tried to search the internet for good images or whatever, to no real avail. And now here was this just gorgeous color scheme showing up on my phone because of the date/time stamp color being altered by some algorithm in response to me updating the background image.

At one time, I had reason to believe I might someday get a community development job where I live. So in my fantasies of my future self as me having my dream job here, a brown, blue and white color scheme was something I wanted to develop as an encouraged theme for the downtown area.

I had fantasies of putting together kind of a style guide to help local business owners get inspired. It wasn't intended to dictate anything to them, but I felt like if I gave people enough examples and maybe encouraged the city government to adopt brown, blue and white as the official color scheme for government-owned bits of the downtown, we could level up the style and sophistication of the downtown area by a whole lot without much money or effort.

The downtown area already has a lot of brown, like for guard rail things surrounding the public trash cans. I've heard a city official talk about the fact that they don't really have a color scheme, but they do just have a lot of brown.

I got the impression that she didn't like it. Most people don't think of brown as a very pretty color.

Someone else suggested they officially adopt brown with green as the color scheme. They suggested it referenced the lumber history of the area.

I felt that was a bad idea. I would like to see them add blue and white accents to the existing brown to brighten up the downtown. Blue references the sea and rivers and it's a much more cosmopolitan kind of idea.

In some sense, lumber is the past for this area, not the future. But our rivers and the port are essential parts of the identity of this area and that will never change and that will be a part of our future.

We have this historic downtown and the history is very tied to practical, hard working stuff, like the lumber industry and ship building. Mid Century Modern design is a historic design type where form follows function and it is clean and minimal.

It's not only a historic reference, I feel it's got a very sophisticated, urban vibe that plays well with a hard working, get-your-hands-dirty kind of place and I just love it. Candice Olson of Divine Design has done a few Mid Century Modern rooms and they tend to have dark wood floors or, say, a large dark wood coffee table, plus white, light blue and/or grey (or kind of a steely blue-grey).

I haven't yet gotten around to putting together any kind of style guide type resources -- think something akin to a design book with swatches and representative photos -- but I was extremely taken with what I was suddenly and unexpectedly seeing on my phone just a few days back. So I ended up redoing my Project: SRO website in shades of dark brown, light blue and white borrowed from the screenshot and using the blue coloring from the date/time stamp instead of the blue from the light display.

This post is being written largely because when I changed the Reader access setting back to Public I had no "share" icon. It also ended up with a few other weird details and I had to fiddle with settings for a few minutes to straighten everything out.

While it can be useful to take a site to private while working on it, you may need to re-enable the Share buttons and check to make sure all the settings are what you thought they were. I have had to do this on other occasions when returning a Private site to public access.

This is a screenshot of my new site and I'm really happy with the look: